First off, there will be no Jedi News article this week. My editor accidentally forgot to put "What Measure is a Tusken?" on the main page, even though it's already in my archives (hence the link). I did have another article completed for this week, but it's being pushed back. In return, I was allowed to leave the version on my blog up.

This will actually allow me to ask my loyal readership for help. The way I'm structuring the articles from now on is that I will do about five articles mainly centering around one film in the Republic era of the Saga, one article more about the Saga as a whole, then the next film in the series, rinse, repeat.

I'm almost through Clones, and will start Sith in a few weeks. Trouble is, I'm having issues figuring out what to write about. I have some things planned, but not enough to fill the blocks. So I want to ask you, my readers, to tell me in the comments anything I-III related that I haven't yet covered that you'd like to see me tackle or get my opinion on. It could be a common criticism, a philosophical debate, or just gushing about one of your favorite aspects.

While I'd like more about Revenge of the Sith and Phantom Menace, since those are next, I would also heartily accept ideas for the next round of Attack of the Clones as well, even though I know what I'm doing for this block.

I thank you all in advance, and with that out of the way...


So I've played through the Naboo Invasion levels on both sides, and I've got to say that aside from shoehorning Yoda (and Jango Fett for the pork side) into the story for the levels, it's faithful enough for an affectionate parody and is a hell of a lot of fun.

A few weeks back, I ended up finding these guys at a Wal-Mart: 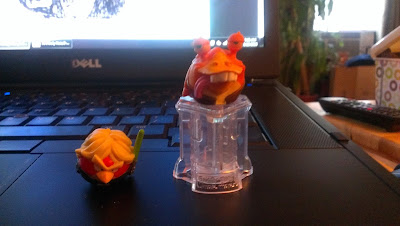 I wish I had gotten a I-III related second bird instead of Jedi Luke, but he was the only one there packaged with Jar Jar, who I NEEDED. Besides, since Eddie at the Phantom Menace Holiday got stuck with Leia, I thought it was oddly fitting.

At first I thought my phone wasn't capable of handling the Telepod system, since it wouldn't transport even though there was an indicator for the base. However, it seems all I had to do was hold it right next to the light and the QR code was read. Now, I can use Jar Jar and Luke in every level once each without needing to use the base again. Oh, and Jar Jar's ability is one of the best in the game. On paper, it's merely a grapple with his tongue, but it's so versatile and so deadly because it won't let go until you tell it to, meaning that you can just have him swing around in a brief whirlwind of destruction. It is glorious.

As to my promise to buy the game, I kept it....sort of. My wife guilted me into getting the free version on my phone, but she bought the full version for her Kindle because she couldn't find the free one, and since we're married and our money is pooled I technically did buy the game like I said I would. From a certain point of view.

I only have one major gripe so far, and that is that Sebulba Pig is currently not playable. Not just unreleased, but not even in the playable character roster yet regarding achievements and buy-able reinforcements. Hopefully emphasis on "yet" because he IS in the game as an enemy on Tatooine, and there IS a Jenga game using him in plastic form.

I'm off to throw Gungans at Tuskens.

UPDATE: Seems like the Telepod characters need to be scanned each time you turn the game on, so it's not permanent. Still, at least I feel somewhat less cheated by the cheapness of the figures themselves.
Posted by The Nilbog at 7:54 AM